The genus Metasequoia has been discovered in the fossil record from the early Upper Cretaceous. The name Metasequoia was first assigned to Eocene fossils discovered near Tokyo, Japan by Shigeru Miki in 1941. Two years later Metasequoia glyptostroboides, Dawn Redwood, was found growing in the wild in the Szechuan/Hubei region of China and described as a new species in the same genus as the Eocene fossil in 1941. The discovery of this new species was considered "the greatest discovery of botany in the 20th century". The Arnold Arboretum of Harvard University funded an expedition by Chinese collectors to collect seeds. Soon after, seeds were distributed to various universities and arboreta worldwide for growth trials. A packet of seeds had been sent to the Department of Botany at MSU, but the fate of those seeds is unknown. Professor Milton Baron, director of Campus Park and Planning at MSU and graduate of Harvard University wanted to obtain a tree to plant in the WJ Beal Botanical Garden. He contacted Donald Wyman, horticulturist at the Arnold Arboretum and arranged to have this tree shipped to MSU. The tree was planted in this location in 1954. Unfortunately, the tree was struck by lightning in the 1990’s before the current lightning arrestor was installed in October 2012. The top of the tree was removed due to the unstable nature of the trunk at that point. 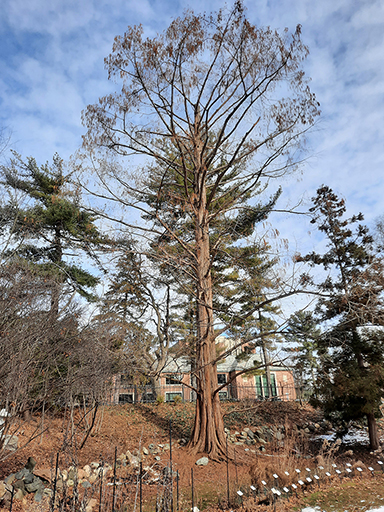