This huge old American elm in the oval is a wonderful example of how grand this species once got and why it was so desired as a street tree in urban environments during the mid-20th century. This tree is over 100 years old and represents one of over 5,000 elm trees which once grew on campus during the 1950s. Today, the number of elms on campus has dropped to less than 300. The decline in elms was due to the introduction of the European elm bark beetle which carried the fungal disease Dutch Elm Disease (DED) to the United States in 1930. DED arrived in Michigan shortly thereafter. The pesticide DDT was used extensively in an attempt to stop the spread of the insect vector and DED. But DDT is toxic to birds. MSU ornithologist Professor George Wallace’s research on the 'dying robins of Michigan State University' featured prominently in Rachael Carson’s book "Silent Spring" published in 1962. “Silent Spring” soon became a touchstone for the start of the environmental movement and an increasing awareness of our impact on the natural world. Today, our elm trees are injected with a fungicide that prevents the fungus from growing in the vascular tissues of elm trees rather than spraying insecticides to kill the bark beetles. This newer technology has made it possible for us to preserve this mature specimen of the American elm for us to enjoy while maintaining a healthier environment. (see https://alumni.msu.edu/stay-informed/alumni-stories/feature-the-robins-of-msu) 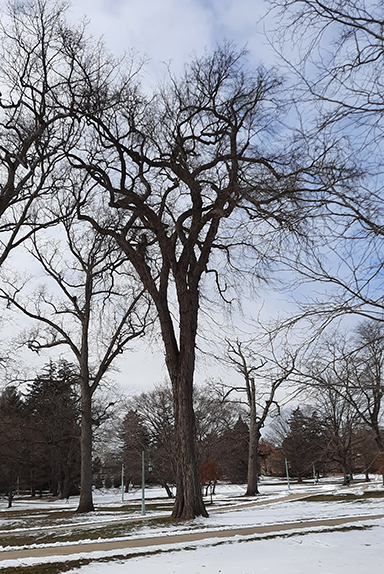